Don’t you just love coconuts? Not only they taste delicious, but also coconuts are high in dietary fiber and antioxidants, that help in fighting infections, improving digestion and heart condition, preventing obesity, providing a quick energy boost and a lot more. They are so versatile for they can be added to any preparation –  from savory dishes to sweet items, to up the flavor. But cracking open the coconuts is not an easy task. It’s definitely one tough nut to crack. Nature made coconuts tough to open so as to protect the embryo. The hard brown shell covers the edible white part of the coconut and that is the part which is most difficult to extract. But, what if we told you that there are a few easy ways to extract the super delicious white part?  Don’t believe us? Here are two super easy and quick techniques for cracking open a coconut.

Before you get started, locate the eye-like markings (dark indentations) on the coconut. There will be 2 or 3 such markings on the shell which are the weakest spots of the coconut. Puncture a hole in an eye of the coconut with a knife or nail and a screwdriver, and drain the water. Coconut water is delicious, so save it! 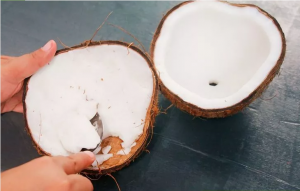 You can use your vegetable or potato peeler to remove the brown part off the extracted flesh of the coconut. Wasn’t these methods easy? Now you don’t have to waste hours and energy trying to get hold of that delicious white part of the coconut.