A cruel father-in-law forced his son’s wife to give birth to a 2-headed baby despite doctors telling them in advance that there is something wrong.

The cruel father-in-law has now ordered the family to give the baby up for adoption. 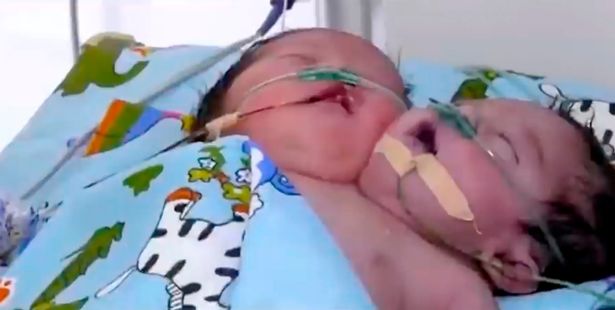 The mother, who is from Uzbekistan, was told that the twins were conjoined 21 weeks into her pregnancy, however, her religious father in the law banned her from having an abortion.

The newborns have separate heads and brains but only share on 1 body.

Doctors treating the baby said that the infant has 2 lungs, 1 single stomach, and 1 genital organ.

The woman, who already has 3 healthy children, was ordered by her father-in-law to go ahead with the birth.

However, everything changed after the birth of the twins.

The father-in-law, who is the head of the family, said that the child should be given away into state care. The father in law, whose identity was not shared with the public, said:

Where could we take them? We don’t even know how long they will live. I made a mistake. I should have ensured my daughter-in-law (had an abortion). I thought a healthy baby would be born.

A friend of the mother, said:

It is hard to imagine what she was thinking all these months, and how she saw the future of her children. She is a mother. She just prayed.

Dr. Dilshod Rakhmono, a senior medic that is treating the baby, talked about the unusual birth with the local press. During the interview, he said:

This is a very rare case, only one in 200,000 or 220,000 births. Such children can live a long life, they may live up to the age of 30 or 50. But our case is a little more complicated, that is, the bodies have grown together into one. For this reason, we plan to conduct complex checks.

The doctor said that he will take all measures to save the twins.

He also said that the birth could be a possible outcome of a marriage between relatives or being exposed to radiation.