Animal rights activists have shared horrible images that show the aftermath of the world’s biggest animal sacrifice festival, the Gadhimai Festival in Nepal. 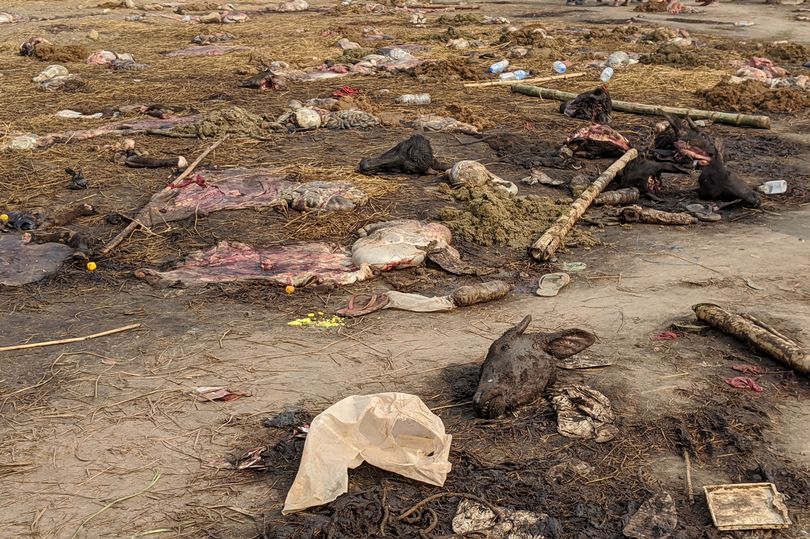 The Gadhimai Festival was launched on December 3, 2019, after a priest killed a goat, rat, chicken, pig, and a pigeon.

The festival went ahead even after the government banned it a couple of years ago.

The festival takes place every 5 years.

Hindus believe that the festival brings good luck and encourages Gadhimai, the Hindu goddess of power, to answer the prayers or wishes of her worshipers.

The horrible festival chops the heads of buffaloes in massive numbers. The supreme court of Nepal directed the government to reduce animal sacrifice in 2016, but it took place anyway.

According to reports, thousands of Hindu worshippers from across the country traveled to watch the massacre.

Arkaprava Bhar, a member of the Human Society International in India, watched the entire event at the scene.

Bhar explained what happened throughout the event.

Bhar said, “When the killing started, I could hardly believe my eyes. It was surreal and appalling and devastating all at once. I felt heart broken and furious and faint. Young buffaloes were stumbling over the dead bodies of others, babies watched as others were butchered, some attempted to flee the sword but were caught by the back leg and held down.” He added, “I just wanted it to be over, for them and for me, but the killing went on for hours. It was a shameful, protracted, bloody enterprise that I hope to never see again. The horrors of Gadhimai will haunt me probably for the rest of my life, but I am more determined than ever to end this bloodshed.”

Alokparna Sengupta, the managing director of the Human Society International India, called the incident as one of the most depressing and challenging experiences of her life.

The event left animals without heads.

Sengupta said, “Animal after animal had their heads lopped off, butchers hacking away at their necks and the corpses twitching away afterwards. As I watched terrified baby buffalo being dragged to their death, I was filled with anger.” Sengupta added, “Our team went back to visit the ­aftermath today and the air was thick with the stench of blood, ­rotting flesh, animal and human faeces, and garbage. In the main temple arena where the majority of buffalo are slaughtered, the ground is littered with the animals’ ­severed heads, skin and entrails.”

In 2009, nearly 500,000 buffaloes, goats, pigeons, and other animals were killed just to celebrate the sacrifice festival.

Many believed that the festival was at the height of its popularity in 2009.

In 2014, authorities announced that 30,000 animals will be allowed to be slaughtered in the sacrifice festival. Sengupta talked about the impact that the sacrifice festival will bring to the kids.

Sengupta said, “These children are being taught that abusing animals in this way is normal.”

The FAWN (Federation of Animal Welfare Nepal) is set to sue the government of Nepal and the mayor of the Maha Gadhimai Municipality.

The federation will bring the case to the Supreme Court of Nepal as they failed to stop the mass sacrifice of the animals at the festival.