The first thing we do when we wake up is to draw back the curtains so the light can enter our room. But sometimes something comes between and disrupts the amazing view.

This was what happened to a couple from Northamptonshire on November 3, 2019.

A couple from Northamptonshire, whose identities were not shared with the public, were making a hot drink on Sunday when they spotted a massive bull relaxing their back garden. The husband saw the animal first, and the first thing he said was “f*ck, Arnold’s in the garden.”

Arnold is the name of the bull by the way.

The husband was already familiar with the massive bull, who actually weighs nearly a ton, because of his masculine body.

The bull was named after bodybuilder Arnold Schwarzenegger and lives in the field behind their house. 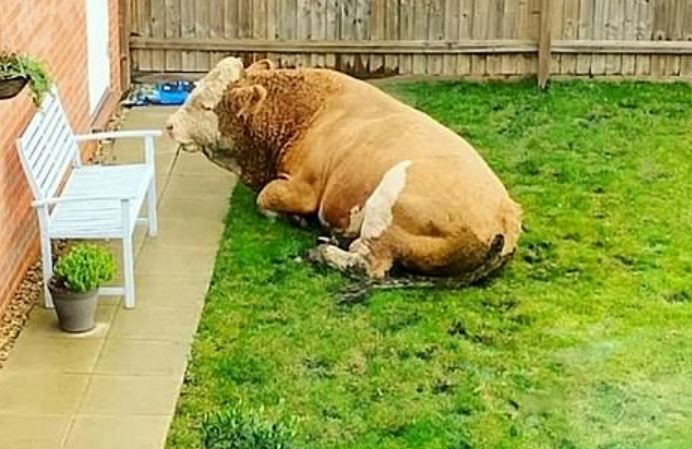 It is believed that Arnold managed to get inside the house after smashing through the fence that separated the back garden from the field.

The husband later told her fiancé about the uninvited visitor, and at first, she didn’t believe him.

The man simply won the argument by pointing out the window and told her fiancé to watch Arnold.

Talking about the reaction of the fiancé, the man said, “She was petrified. It was a moment of panic. I didn’t think it was wise to go outside it as [Arnold] was probably really distressed.” After relaxing, Arnold reportedly headbutted the wheelie been, potholes, and pooed on the patio.

The couple said it was clear that Arnold wanted to mark the garden as his own territory.

Not capable of stopping the animal, the homeowners called the farmer that owned Arnold and told him to get his bull out of their back garden. The homeowner said, “I managed to get through to the farmer and he was 40 minutes away. So we just sat and watched as he tore up the garden basically. I had been doing up the garden over the summer but he’s completely ruined my turf!”

He added, “We’ve been living here for 18 months and have seen the odd sheep outside the house. But needless to say, we’ve never had a surprise like that on a weekend.” Luckily, the farmer that owns Arnold arrived on time.

The farmer managed to tame the bull and take it away before it caused more damage to the house of the couple.

The couple is now looking to invest in stronger fencing so they can avoid things like these to come up again.