Click here to Read: 10 Impossible Records Bahubali 2 Has Broken On 1st Day Itself

A very long 3 yrs wait has came to an end and the epic movie Baahubali is finally on big screens to entertain the viewers. After a long 1 year of pre-production, an year of shooting and an year of post production finally the wait has come to an end. Rajamouli and his crew have delivered a magnificent movie with a splendid performance form the lead characters Prabhas, Rana Daggubati, Tamannaah, Anushka Shetty, Ramya Krishnan, Sathyaraj, Sudeep, Adivi Sesh, Nassar, Prabhakar. Each and every eye this weekend in India will be on the biggest budget Indian film of all time, weighing in at some $40 million for two parts, it is also shaping up to be one of the biggest movie events the country has seen in years. Everyone are aware of the effects and graphics used by them on screen, but behind the screen are many unknown facts that made this epic movie a bit hit. Here are 30 unknown facts about Baahubali. 3 years hard work went into the movie making. Rajamouli and his crew worked for almost 3 years for the completion of the movie which will be released in two parts.

2. Baahubali has entered Guinness Book of World Records by making the largest poster ever The film’s Twitter handle posted a picture of the ‘world record’ movie poster. The poster was unveiled in Kochi. The movie Baahubali has entered Guinness Book of World Records by making the largest poster ever. History had been made through this grand poster of “Bahubali : The Beginning”. The poster has the dimentions of 50,000 sq feet.

3. Prabhas didn’t do any movie in this period of 3 years. 4. Around 800+ Technicians worked on Art, Design and Visual Effects Bahubali has the highest number of National Award winning technicians working on the project. . Around 800+ Technicians worked on Art, Design and Visual Effects for this magnum opus.

5. Prabhas has gained lots of weight Prabhas has gained lots of weight for the movie without gaining fat. His hard work can be clearly seen on the screen in the trailer itself.

Film’s lead actor Prabhas also postponed his marriage for the sake of this film and for director Rajamouli. The makers of the film had gifted Prabhas some major league Body Building equipment imported from overseas. The equipment had cost them a whopping 1.5 Crore INR.

8. Anushka is the only actress worked with Rajamouli for the Second time Anushka Shetty is the only Heroine to be repeatedly cast in a Rajamouli film. She had earlier done “Vikramarkudu” in Rajamouli direction. Rajamouli has the habit of not picking up heroines from his earlier films, but Anushka by acting second time in his direction broke the jinx this time. Check 10 Surprising Facts About Anushka Shetty

Karan Johar joined his hands with Rajamouli to promote and release the movie in Hindi. Along with that the movie is also dubbed in Tamil, Malayalam and few other languages, is set for release on the same day i.e 10th of July. A massive budget of 250 crore. The highest budget movie ever in the history of Indian Cinema. Biggest motion picture of India. The trailer is splendid and that itself says how much hard work has gone into the movie.

Never ever before seen CG graphics with over 600 people working on the camera graphics. 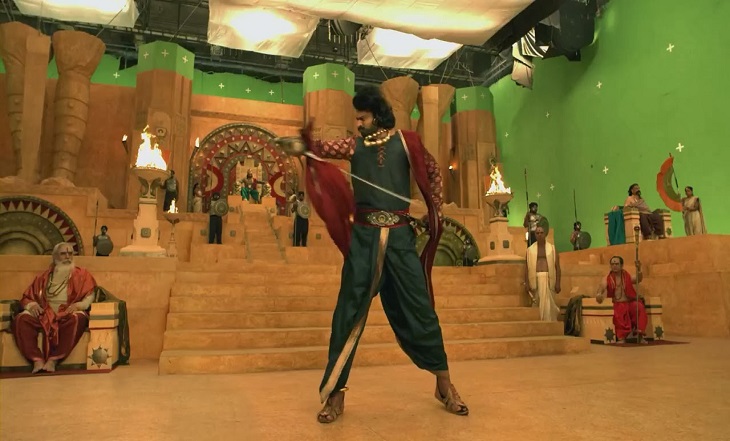 It took Almost 1 year for Pre-Production work which is highest for any Indian movie till date. The magnificent palaces, impregnable forts, breath-taking water falls were all created for the movie. Usually a 24-foot-high scale set is created, but for this movie the makers decided to go for 45-foot-high scaled sets which was really amazing.

13. No Single flop in his film career – SS Rajamouli Most importantly the movie is directed by SS Rajamouli who previously applauded for his work in Eega. He didn’t has a single flop in his whole career. That itself speaks about his legendary streak. The trailer of the film had 4.05 million views on YouTube, Telugu and Hindi trailers crossed 1 million views each within 24 hours. The most expensive films made in the country with a reported budget of about Rs 200 crore, the film would hit 4,000 plus theatres worldwide..

19. Only film that has been featured on BBC documentary It is the only film that has been featured on BBC documentary on 100 years of Indian cinema even before its release. 21. Shooting of the film started at Rock Gardens in Kurnool from 6 July 2013 22. Rs. 20 crores as remuneration to Prabhas

The makers of ‘Bahubali’ have promised to offer Rs. 20 crores as remuneration to Prabhas making him the highest paid actor in Tollywood.

Prabhas and Rana have crossed 100-Kg weight for this film. The actors  Prabhas and Rana had to take 6-8 meals a day and every item had to be strictly non-vegetarian only. The actors had to eat according to their diet plan every 2 hours and rice was not at all added to their menu. The target for both actors was to consume 2,000-4,000 calories per day.  Also Check: 13 Interesting Secrets About Rana Daggubati

Made in Telugu, Tamil and dubbed in Hindi, Malayalam, English, French, Japanese.  Read: 8 Unknown And Interesting Facts About Ramya Krishnan Arri Alexa XT and this will be Rajamouli’s first full length feature film to be shot.

26. Peter Hein Has been training the lead actor for weapon training. 28. Common between the recent release ‘Jurassic World’ and ‘Bahubali’ There is one thing common between the recent release ‘Jurassic World’ and ‘Bahubali’ – both movies share the same special effects team. The film faced legal trouble after Jain monks protested against the film’s title Bahubali, revered as a deity in the community. They were worried that makers will show the peace loving God in a violent way.

30. The movie has been shot in 16:9 aspect ratio for bigger and better quality pictures. Must Read: 13 Unknown and Interesting Facts about Bahubali 2

Hope you enjoyed the article. Press Ctrl+D to book mark this webpage for more information and updates.