Mahabharata – The epic fusion of power, Dharma and respect is a nearly perfect example of how to go about your life except, of course, the war. The battle of Kurukshetra, the most crucial point in the epic, was so big on the scale that it marked the end of an epoch. The war which lasted for eighteen days is every bit as ugly as any war has ever been fought in human history. The battle culminated in the victory of Pandavas and the death of all Kauravas.

Ever wondered what happened after the Pandavas won? How long did they rule Hastinapur? How did they finally die or left the mortal world? What happened with Lord Krishna? Well, here are the probable answers.

1. The 18-day long battle ended with only the Pandavas and a handful of others survived

Aswathamma killed all the upa-pandavas (children of Pandava brothers with Draupadi), shikandi and dhristadhyumna and several others on the 18th night of the war. When confronted by the Pandavas, he launched a Brahmashira to kill Uttara’s womb (only to be saved by Krishna and to be named by him as Parikshit).
Hence, the 18-day long battle ended with only the Pandavas, Satyaki, Kripa, Ashwatthama, Kritavarma, Yuyutsu and Krishna as survivors. The carnage had left Gandhari (the mother of the Kauravas) devastated, who then cursed Lord Krishna of witnessing the same annihilation of his own family (death of all Yadavas).
Gandhari was woeful, but more than that, she possessed angst for Lord Krishna because she thought that despite having the divine power to stop the war, Krishna chose to side with the war, and hence the curse she gave him and Lord Krishna accepts the curse. After the battle decided the fate of Pandavas and the fall of Kauravas, Pandavas were crowned the rulers of Hastinapur with Yudhistira being at the helm of affairs. The states of Hastinapur and Indraprastha were reunified and were ruled by the Pandavas for 36 years.
15 years from the beginning of their reign, Kunti, Vidura, Dhritarashtra and Gandhari decided to go to the forests on a voluntary exile. There, Vidura receives a peaceful death and passes away. The remaining three died in a forest fire. 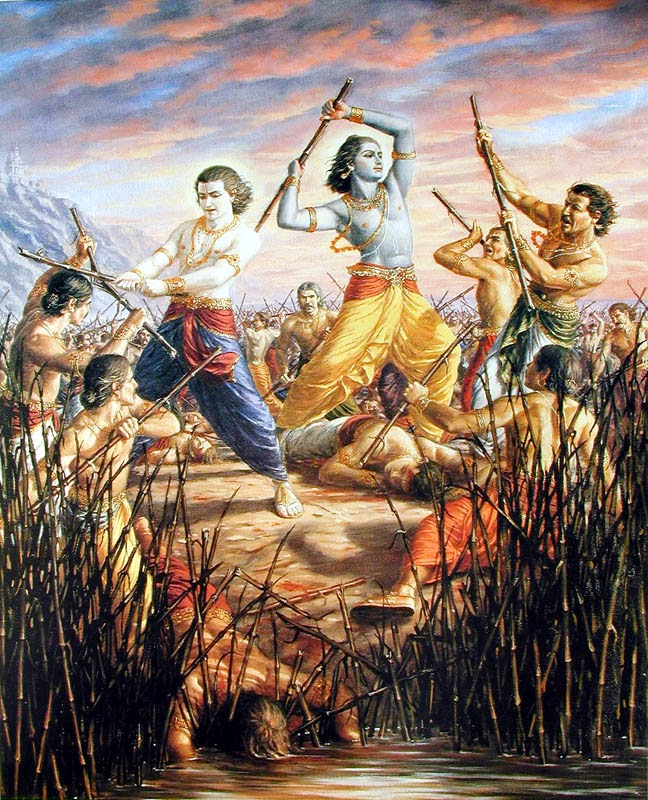 Meanwhile, Gandhari’s curse to Lord Krishna starts taking shape near the city of Dwarka. After around 35 years of the Kurukshetra war, the sons of Shri Krishna playfully teases some rishis and gets cursed in return. Samba (Krishna’s son) dressed as a pregnant woman, along with other Yadavas, went on asking rishis to predict the gender of her future child. One of the rishis gets angry and curses that he will give birth to an iron piece which will destroy their entire race.

After some days, Dwaraka witnesses bad omens and sinful activities increase. Shri Krishna is concerned and instructs others to go on a pilgrimage to Prabhasa. At Prabhasa, Yadavas revel in merry making, drink lots of alcohol and get intoxicated. A fight ensues among them with Yadavas killing each other to the extent of almost wiping out their entire race. Only Shri Krishna, Daruka, Vabhru and Balarama survive. But later on, Vabhru and Balarama leave this world too. Shri Krishna sends Daruka to inform Arjuna and bring help. Meanwhile, one day, while Shri Krishna was meditating in the forest, a hunter named Jara accidentally shoots Lord Krishna, mistaking him to be deer. The arrow strikes at Shri Krishna’s foot and leaves him wounded, ultimately killing him. Thereafter, Shri Krishna consoles the apologetic hunter and then leaves his mortal body on this world and then merges with his true image of Lord Vishnu.

6. Dwaraka drowns in the sea Learning about the mayhem occurring on the Krishna’s side, Arjuna arrives to help the dwindling clan of the Yadavas of which the old men, women and children, and the 16,000 wives of Krishna, seem to be the only survivors. As they together set off for Indraprastha, the water levels begin to rise, causing the drowning of Dwaraka in the sea. The army of Arjuna, travelling with the Yadava women and children are attacked by robbers on their way to Indraprastha, and Arjuna, the most celebrated warrior of the epic, fails to protect most of them and starts to question his warrior abilities.

7. The renouncement of the Pandavas’ kingdom to Parikshit When Arjuna confides in sage Vyasa of his inability to protect those who depended on him, Vyasa tells him that the Pandavas have served their purpose of their life, and now they should leave for their final journey to the Himalayas and pass on the responsibilities to the next generation.
Arjuna informs Yudhishthira of Vyasa’s advice, and the Pandava brothers along with the wife Draupadi begin their journey across the whole country, to begin the final ascent to the Himalayas.
Before leaving to the Himalayas, King Yudhistira coronates Parikshit, the grandson of Arjuna and son of Abhimanyu, as the king of Hastinapur. The Pandavas first go south, visiting sites along the way. Thereafter, they head west to see Dwarka and feel depressed to see the beautiful city submerged under the sea and dead. They turn north; stop at Rishikesh, then cross the Himalayas.
As they start climbing the Himalayas, a stray dog (Lord Yama in disguise) befriends and accompanies them for the entire journey.

9. Death of all except Yudhishtir As Pandavas along with Draupadi climbs their way to heaven on Mount Sumeru, they started falling to their death one by one. All Pandavas except Yudhishthir dies. It starts with Draupadi, followed by Sahadeva, Nakula, Arjuna. Bheema is the last to fall to death. The reasons for their death are associated with their desires, pride, partiality or selfishness. Only Yudhistira, who didn’t take pride in anything, makes it to the gateway of heaven atop the Himalayas, along with a dog that had followed him all the way. When Yudhisthira and the dog reached the gateway of heaven, Lord Indra appears on his chariot asking Yudhishthira to commence with him, his final journey to heaven. Yudhishthira asks him to take the dog along with them – A request which Indra disapproves of. Yudhistira felt that he couldn’t abandon that dog that had been so faithful, so he refused to enter celestial world.
It is only later on when Yudhishthira is made to realize that the dog was actually the deity Dharma, who in awe of Yudhishthir’s virtues, appreciates him. He congratulates Yudhishthira for always standing up for justice, truth, virtue and other aspects of Dharma. And eventually, Yudhishthira enters in Indra’s chariot to heaven. Thus, Yudhisthira had been granted the privilege of going to the world of gods in his human form. So great was his righteousness.
Before letting Yudhistira enter heaven, Lord Yama takes him on a tour through the gallows of hell. There, Yudhistira witnesses his brothers and Draupadi redeeming their sins. Lord Indra, then, takes Yudhistira to heaven and promises him that his brothers and Draupadi will be there.

11. The happy reunion in heaven In the grand hall of the heavens, Yudhishthira saw, Krishna surrounded by all gods. Karna was sitting among the Adityas, Bhishma among the Vasus and his ancestors. The heroes and warriors who had died in the war were also there. A surprising presence there was that of Duryodhana.
Narada explained to Yudhisthira that Duryodhana never showed cowardice, he had been a just and good king, he died a brave’s death that too in the holy place. Hence, he gained entry to the heaven.
Yudhisthira had told only one lie in his otherwise sinless life. For that he was made to come to the heavens by the way coming from the side of the hell. All his brothers and others had to spend a few hours in hell for their sins.
Finally, the Pandavas, Karna, and all Dhritirashtra’s sons get back together, free of angst and rivalry against each other in Heaven.

12. The start of Kaliyug

Soon later began the Kali Yuga, which is the world as we know today.