A lot of people in the owner have pets, but it’s not an easy task to take care of them. You need to groom them, take them on daily walks, feed them properly, and make sure that they are healthy. Kai, a golden retriever, who put on a lot of weight while it was living with its owner, was brought to a doctor and the owner wanted to euthanize the dog.

When the dog was brought to the clinic, the vet did not agree to euthanize Kai, and instead, the vet called the Misfits of Alberta Animal Rescue.

The animal rescue group of Alberta helped Kai find a new permanent home that would accept his fluffiness. Pam said that Kai was huge when she took him home.

During an interview with Bored Panda, Pam said, “I could not believe my eyes. His size was staggering. The pictures don’t do justice to how huge he was, and how difficult even a few steps was for him.”

When Pam adopted Kai, the pooch weighed over 170 pounds and the vet said that Kai had to lose more than half of his weight.

When Pam brought Kai into her house, she said that it took him nearly 20 minutes to climb a small set of stairs. Pam knew that the process of losing weight for Kai is going to be a long journey.

Unlike the previous owner of the pooch, Pam said she didn’t want to give up on Kai.

Pam added, “I do not know anything about Kai’s previous owners and quite honestly, I prefer it that way. I don’t believe in shaming people so I’m not sure blame is the right word. I do believe that as animal caretakers, our job is to help animals be as healthy as possible. We owe them that much. I believe educating people in how to care for their animals is more powerful than shaming or blaming.”

In order to help Kai lose weight, Pam started water therapy for Kai and walked him 3 times every day. Pam said, “At first he could only go a few steps before resting or laying down. So we went 3 times a day for very short distances.”

Pam said that after Kai started to lose weight, he started to climb stairs and even started to run during their walks.

Pam said, “It was more exciting to watch him regain his freedom than watching the numbers change. I never dreamed he would be able to run, play and enjoy life as he does now. Kai was 10 when he was surrendered, so he is now 11 and full of life.”

After one year of hard work and dedication, Kai lost 100 pounds and became a normal, happy, and healthy pooch. 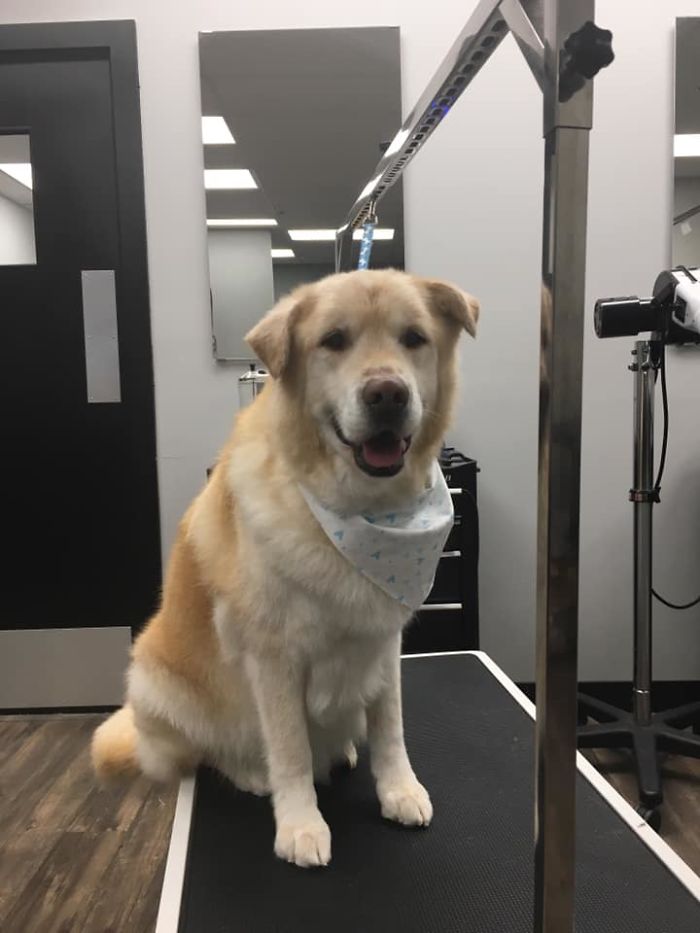 The story of Kai shows that giving up on someone is not good, you just need to create a spark so light can start to burn inside that person or animal.

Pam adds, “Kai exemplifies what we all find good in this world- an indelible spirit and unconditional love. He could have chosen to lament his past and give up but instead he chose to embrace the chance to be better. We all need to believe we can be better. He is a very grateful soul and I am extremely lucky to have him in my life. I am now his adopted mom and he will live out his life with me. I am the lucky one.”

Thank you Pam, for helping out Kai.