A passport is a key to getting into other countries, without a passport, you just can’t get into another country. It is most important thing to travel all around the world.

You might have noticed, maybe while waiting in the passport control queue, we often come across passports of different colors belonging to different nations.

Did you know that there are only four different colors of passport in the whole world?

Generally, they are black, blue, green or red, but the hues differ; yes, there is a great variation in the shades. The color of your passport, though, has a lot more to it than you think. The passports of 193 different UN member countries are basically of four primary colors.

The shades may vary but the base remains one of red, blue, green or black. The rules that determine the appearance of passports are issued by the International Civil Aviation Organization (ICAO).

And while you may think that the color of a passport has purely aesthetic value – you’d be wrong.

Every country has its own specific reasons for choosing one of the four colors for their passport. So here, we have tried to explain the reason as to why the color of your passport is the way it is. So, what are the four colors, and what do they mean?

Here’s what you need to know: 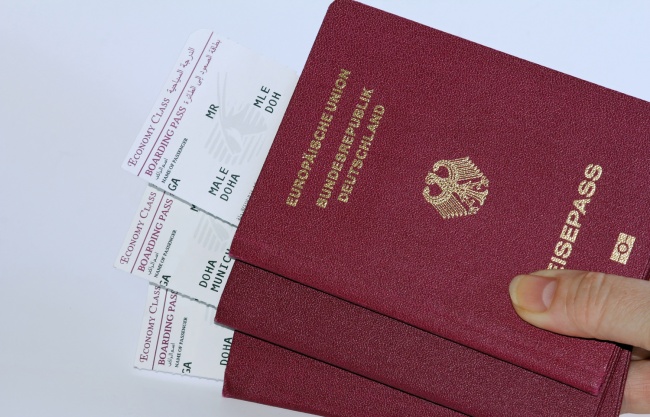 Red is the most common passport color across the globe. It is common amongst the member nations of the European Union (EU). The red cover is argued to be chosen by a country because of its past communist history or a present communist system.

Regular EU passports are burgundy-red while that of Switzerland stands out as bright red. Turkey changed its passport color to burgundy with a hope of joining the EU. The other significant countries that have a red passport include China, Serbia, Russia, Poland, and Colombia. The second most common color for a passport cover is blue. From America to India, many countries prefer a blue cover for their national passport. The 15 Caribbean countries of the CARICOM (Caribbean Community and Common Market) to prefer a blue passport. Green colored passports are common for Islamic countries. These include Pakistan, Saudi Arabia, and Morocco. Green is believed to be the favorite color of Prophet Muhammad (PBUH) and is also considered to be a symbol of nature and peace.

That is also one of the reasons why many Muslim countries have that color on their flags too. Apart from that, a group of African countries including Nigeria, Ivory Coast, Burkina Faso and Senegal has a green passport to show their allegiance to ECOWAS (Economic Community of West African States).

The rarest passports are the ones with a black cover. Not many countries prefer a black color because of different reasons. The countries that do use black passports include a few African nations like Zambia, Congo, Chad, Malawi and others. New Zealand uses black passports as it is the country’s national color.

Here is a world map painted according to the color of a passport issued in each country.

NOTE: At present, the Indian passport comes in DARK NAVY BLUE color so don’t confuse it with BLACK.

It should also be noted that a single country can issue differently colored passports to differentiate civilians, officials, and diplomats.

For example, the Indian Government issues passports in three different colors; blue for a regular passport, white for official passport and maroon for a diplomatic passport. In Turkey, a green passport is issued to people who are allowed to travel visa-free to a few countries.

To one side from the reasons mentioned above, the passports are of the four colors because of their availability and durability.

Isn’t it an interesting piece of information? Let us know your views about the colorful existence of passports in the comments section below.

Home » News » Do You Know The Reason Why All Country Passports Are Of Only Four Basic Colors? Here’s The Reason